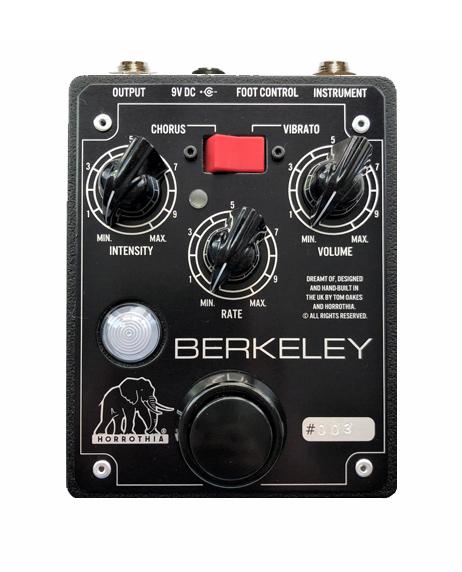 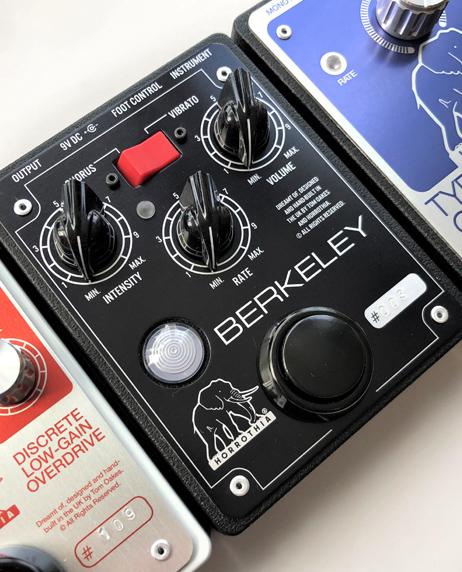 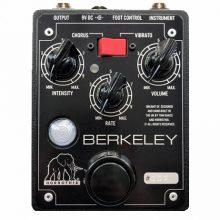 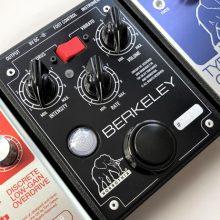 A modern re-imagining of the late ’60s liquid Leslie vibe.

The Berkeley signal path is almost exactly identical to the original late 60’s vibe.  Carbon film resistors, Mylar caps, transistors chosen for very very similar or identical characteristics to the originals.  Some small key changes have been made in line with mods that were done in the late 60’s to open up the low-end and add more liquid movement.

There are 4 photocells, but no bulb.  Hand chosen Vactrols are matched one by one in a custom test fixture to make sure that every component works within a well defined ‘sweet spot’ range.  No guessing here.

​The LFO shape is the real key to getting the right behaviour from a vibe.  There are several interdependent things going on here.  The originals’ bulb led to beautiful organic nonlinear waveforms when plotted on an axis. The faster the rate, the more the wave ‘leans’ or ‘skews’ giving the notorious throb.  Also, the intensity changes as the rate changes, again down to bulb characteristics.  The ‘trend’ or ‘bias’ of the waveform also moves as the intensity AND rate changes… a complex picture.  All of this behaviour was taken in and modelled digitally.  The LFO that controls the photo-cells is digital but analogue smoothed so there are no uncharismatic spikes or glitches.

As every original vibe was different, there are 3 trimmers inside the Berkeley to tune its behaviour to your idea of the perfect vibe. Turning up Input Impedance brings back brightness, volume and a more modern sound at one extreme, warmth and chewiness and the other.  Phase Notch Depth allows you to fine tune the balance between the wet and dry signals in chorus mode.  The Voicing control is more complex.  I call the extremes Vintage and Modern.  At the Vintage extreme, the LFO shows the full idiosyncratic behaviour of the vintage units.  Dialling it back to the Modern extreme, the Berkeley shows less and less of these characteristics and the depth becomes as wide as the unit can operate.  Wider sweeps paint a more contemporary picture.  All of these controls are continuous, so dial in YOUR position.

​Another Berkeley evolution is the choice of bypass modes.  Originals just switched off the LFO, so audio still passed through the circuit.  By holding down the footswitch on power up, the Berkeley changed to relay true bypass.

​The Footswitch jack allows you to plug in a TRS expression pedal and control the speed like an old vibe.  Even bringing the heel back switches the LFO off / bypasses the unit like an old one.  This socket can also be compatible with the CV output from modular synths or other units – get in touch for further details.

​Like all Horrothia pedals, the Berkeley is dreamt of, designed and hand built in Falmouth, United Kingdom by human beings.