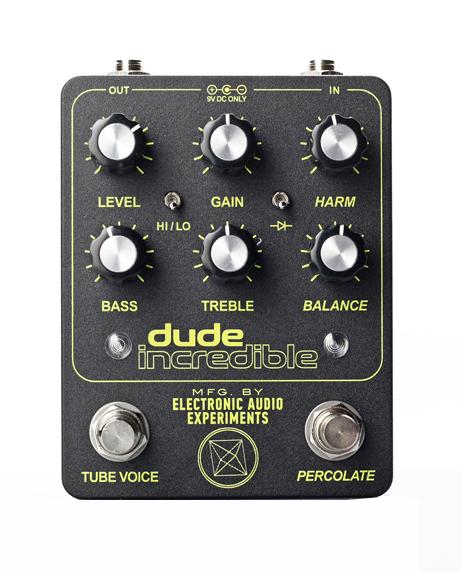 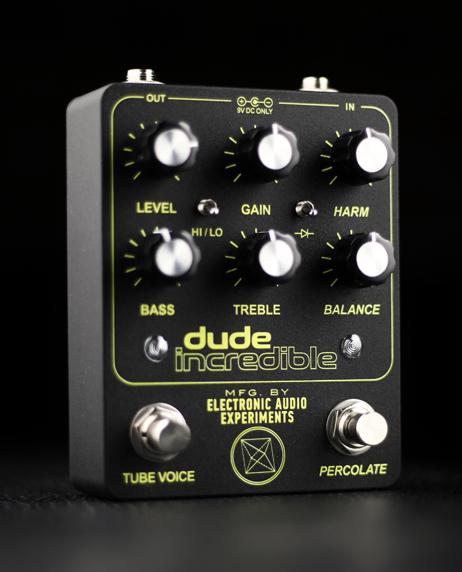 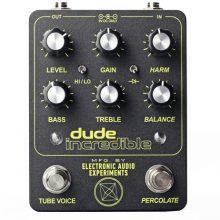 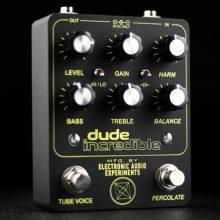 The Dude Incredible is a pairing of two cult classics: the IVP “Tube Voice” preamp and a percolator-style fuzz.

The Dude Incredible is a pairing of two cult classics: the IVP “Tube Voice” preamp and a percolator-style fuzz. Together, these two circuits have produced some of the most iconic guitar sounds in noise rock: jangly rhythm tones, ear-piercing treble chords, and endless walls of howling feedback. Originally released in 2017, the Dude Incredible was the first adaptation of the IVP into a pedal format. Now, it returns with some extra features and modern reliability improvements.

The Tube Voice channel is our streamlined version of the Intersound IVP (aka Instrument Voicing Preamp), a nearly-forgotten rackmount preamp from the 1970s. The transformer-loaded overdrive circuit is driven by a pre-gain shelving EQ for a distinctive palette of frequency-selective distorted sounds. Far from just a clang machine, this channel is fantastic for medium gain tones or as an always-on base layer. (This channel can also be found as a standalone unit in our Surveyor pedal.)

The Percolate channel needs no introduction. Our take on this beloved two-transistor fuzz features a painstakingly selected germanium transistor based on measurements of an original unit. We also added a diode switch to select between our custom configuration found in the Dude Incredible V1 and a more traditional highly compressed mode. Combining the Percolate side with the Tube Voice side produces a devastatingly destroyed fuzz.

Even if you aren’t a metal-pick-wielding treble fiend, the Dude Incredible is a source of unique distortion sounds that can’t be found anywhere else.

Bypass Switching: Independent fuzz and preamp circuits with relay-based true bypass switching which defaults to bypass in the event of power loss.

We recommend a regulated, isolated power supply rated for 100mA. Dude Incredible does not accept a battery. The power input is protected from reverse polarity and over-voltage conditions up to 24V.